I get a little case of the pre-disappointments whenever I hear a band described as being in the ‘Folk Rock’ genre. Often times, for my tastes anyway, there’s too much folk and not enough rock. Not the case for Our Machine, the new release from Davenport Cabinet. There is passion and musical articulation at play here that is becoming a rarity in modern music. This is a must have for fans of organically grown music and a game changer for anyone who believes that ‘real’ music died with Phil Lynott and John Bonham.

Travis Stever has been working with variously named versions of the band since 2006 and finally settled on the moniker, Davenport Cabinet, in 2008 for the Nostalgia in Stereo album. 2011 saw Tyler Klose, Stever’s cousin, join the band as a writer, guitar player, and vocalist. The addition of Klose has helped Our Machine to sound more like a full band and less like a side project.

You probably recognize Travis Stever’s name; he also serves as one of the guitarists and vocalists in Coheed and Cambria but Davenport Cabinet is a different animal for sure. The arrangements on Our Machine are concise and have more of a singer/songwriter approach than the sprawling and occasionally bombastic sonic output of Coheed and Cambria. I hear melodic nods toward A Perfect Circle, Days of the New, and even Led Zeppelin among the 12 tracks presented here. The musicianship on Our Machine is top notch without ever feeling over produced or auto tuned in any way. The kin harmonies of Klose and Stever are immediately comfortable and memorable. Get this one!
Stand out tracks: ‘Simple Worlds’, ‘Our Machine’, ‘Deterioration Road’, and ‘These Bodies’.
dave buzard 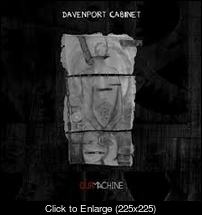