Cut The Blue Wire -We Are Wolves, We Are Not Loved 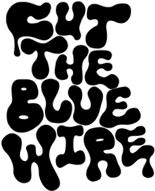 Coming across from Portsmouth, United Kingdom is an amazing up and coming band called Cut The Blue Wire. I came apon this group over Myspace when they sent a friend request and an e-mail from the band asking me to check them out. I took no hesistation to take a good listen to Cut The Blue Wire and just from listening to one of their songs I became attached.

Cut The Blue Wire recently released their debut demo, "We Are Wolves, We Are Not Loved", over the net to promote a familiar Indie/Electro/Post Punk style that's taking over the sound waves but adding a little bit more of a catchier melody to make them stand out from all the rest.

Starting off with "Forced Enjoyment", Cut The Blue Wire begins this song with a great drum beat from drummer Michael Radforth and guitar riffs coming from guitarist Rhys Hounsell. This song may have a hint of mellow in it but still has great energy and chants coming from vocalist DD Ball.

Second on "We Are Wolves, We Are Not Loved", is a song called "No Song Of Mine". Personally, this song is one of my favorites because of the intro of the kick drum and also there's just so much push on the energy. Keyboardist, Luke Hoey, is very well noticed in this song and brings out the Electro in this band very well.

"Get Out Of The Road" is more of an Indie song and brings more of a unique keyboard sound which I might add wasn't a bad thing. Cut The Blue Wire manages to combine a slightly heavy sound with distortion but also adding a few key parts taking out the heavy and bringing in bass lines played by Andrew Vincent.

Another favorite of mine would have to be "Laugh Out Loud". When listening to this song, it totally makes you want to bust out your glow sticks and start to rave even if you don't know how to dance. The vocals in this song are mesmerizing along with the over all music coming from each member of Cut The Blue Wire.

Last but not least, to finish Cut The Blue Wire's demo is a song called "Silence The Guns Raise". This is the perfect song to end such an impressive CD. It starts off on a lighter note and slowly extends the energy to defiently get the crowd of fans moving and singing along.

Cut The Blue Wire is defiently a great band and their demo is wellworth taking a listen to. If you're a fan of Alexisonfire, Taking Back Sunday, or Electro I highly recommend hitting up their website for their FREE demo "We Are Wolves, We Are Not Loved".