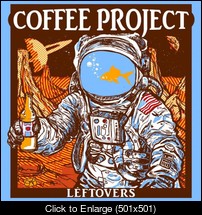 Coffee Project is a definite change of pace, as far as acoustic music goes. Buddy Schaub and Jake Crown make the simplest of acoustic songs. You may recognize the name Buddy Schaub, yes he is also from the band Less Than Jake. But this Florida-based, trombone-guitar duo, has put such a raw sound to their music, you will forget all about that one band I just mentioned. Anyways, Coffee Project is signed to Paper and Plastick Records and have released their 'farewell' album called, "Leftovers ."

I didn't really realize how simple and raw CP was until I listened to, "Leftovers ." Trust me, I do love acoustic music and I know the idea of that genre is just guitar and vocals, but "Leftovers" sounded so empty. The whole album is literally just trombone and guitar. Which doesn't sound bad, but when you listen to it, it just sounds empty, like there should be another instrument to the album. There were only 2 songs that stood out to me. The song, "Laid Up" , was my favorite. Maybe because I have a soft spot when artists yell their lyrics. Sounds weird, I know, but the artist seems to have more feeling in their music when they yell them. So, with that being said, for the rest of the album, I didn't really feel that. It felt like the songs were just being read aloud from a notebook. That the songs were just being sung, you know? For the second song, "Shenendoah Valley", this was the only song that had more than 2 instruments. From trombone and guitar to drums, to violin, to banjo. It was one big folk-country song. Honestly, I didn't like it. Probably my least favorite song, maybe because I'm not a fan of country music. But other than that, each song was alright, no better than the next one. It really does sound like these were the songs that never made it to the previous albums, hence the name "Leftovers." If I could sum up the album with one word it would be, "Ehh..."