Ok. I get it now. The joke was on me the whole time and the joke was that there is no joke. When I think of heavy music from Sweden, I think of Viking Metal or brain eating Black Metal. I think these things primarily because I am a moron who is ignorant about musical geography. Well, wipe that smirk off your face, mister, because Cloudscape is the genuine article. Cloudscape is a melodic metal band that has no problems standing shoulder to shoulder with acts like Lacuna Coil or Queensryche.

New Era is the latest release from Cloudscape and will no doubt raise the band’s profile across the globe. Cloudscape has some definite progressive metal in its blood but it’s really all about the song writing here. The tunes are strong and the left turns and surprise twists are used to great effect instead of just being weird for the sake of weirdness. The underlying lyrical message is very positive without being preachy and is not shy about exploring the fertile subject offerings of progressive rock’s past. ‘Voyager 9’ talks about the secrets of deep space and ‘Into the Unknown’ gives a shout out to dragon ships (now we’re talkin’ Viking metal!!).

‘Share Your Energy’ and ‘Seen It All Before’ are great rock and roll songs that would be huge on American rock radio if such a thing actually existed. Vocalist, Mike Andersson, has a powerful, yet soulful, set of pipes in the vein of Graham Bonnet or Glenn Hughes but when things get heavy, Andersson can bring the heat. ‘Your Desire’ shows the singer bearing down like M. Shadows or even a little Udo Dirkschneider (har har, see what I did there). Micko Theander’s production of New Era is top notch and sonically stands up to releases by Symphony X or Dream Theater. Patrik Svard’s guitar playing is perfect for Cloudscape. His style is similar to Malmsteen and Petrucci but unlike those guys, Svard knows when to lay back and let the song be a song and not a blizzard of shredded notes. No keyboard player is listed in the credits I had access to but there are tasty accents and effects that keep New Era in the modern age. The rhythm section of Fredrik Joakimsson and Hakan Nyander are precise throughout and pummeling when unleashed. Check out the breakdown on ‘Violet Eye’. Joakimsson and Nyander get downright Meshuggah on the proceedings.

Cloudscape walks the line between passionate and dramatic without falling into the fiord of self parody. 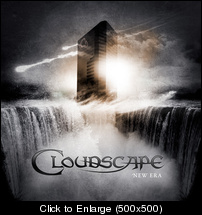