"CROWN OF PHANTOMS" OUT NOW | ON TOUR NOW!

(New York, NY) - CHIMAIRA have debuted a brand new music video for their track, "Wrapped In Violence" surrounding the kick off of the "Celebrate The Chaos" tour this weekend. The tour will feature setlists compiled of all seven of the band's LP's. Support will come from IWRESTLEDABEARONCE, OCEANO and label-mates REFLECTIONS and FIT FOR AN AUTOPSY opening. Vocalist Mark Hunter comments;

"Chimaira turned fifteen last August and the only appropriate way to celebrate the chaos is to hit the road. Take a trip through the entire catalog with us and rediscover old favorites in the new era of domination! Rise up! The time has come..." 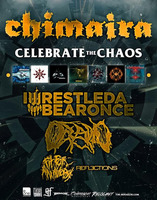 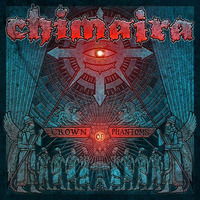 1. The Machine
2. No Mercy
3. All That's Left Is Blood
4. I Despise
5. Plastic Wonderland
6. The Transmigration
7. Crown Of Phantoms
8. Spineless
9. Kings Of The Shadow World
10. Wrapped In Violence
11. Love Soaked Death

The band released "Crown Of Phantoms" last year with a wave of critical praise. Some of the accumulated accolades have included:

"'Crown of Phantoms' is the most important release Mark Hunter and co. have made since 'Resurrection.' They're not dead yet - far from it." Ultimate Guitar

"Crown of Phantoms is a must-have for Chimaira fans. If any fans are highly suspicious about whether the band still has it, there’s no need to fear. Regardless of who’s in the band, or who left, Chimaira got it together and put out another solid album." Metal Injection

"Tracks like 'No Mercy,' 'Plastic Wonderland' and 'Spineless' are absolute slayers that will surely impress longtime fans and newbies alike, and bring that classic 'I Hate Everyone flavor' we've all grown to love." - Revolver Magazine