Crowquill Records is excited to announce the label's newest release, the Self-Titled 7" from San Antonio, TX band, Buho. The label has announced that Orders for the 7" record are now available and shipping.

You can hear the A-Side from the band's upcoming Self-Titled 7" now. "Endless/Blur" is premiering exclusively on Noisey/Vice. The B-Side "Night Clinics" can be heard on Pitchfork as well.

This follows up the band's 2012 EP, Beggar's Teeth, which was recently re-released on Crowquill. You can order that record digitally or on cassette at crowquillrecords.com/products/519821 .

Búho is a three piece, Indie/ShoeGaze/Post-Punk/Whatever band out of San Antonio, Texas. Current members include Mauri Gudiño (Yoshimoto), Brad Angotti (MASSIVER, The Ground, Perpetual Heat), and Andy Elizalde. Hailing from, yet exhibiting a distinctly different character with in a sonically heavy South Texas music scene, Búho utilizes broad calculated strokes of noise, rock, and melodic repetition in an attempt to own their ground in an ever changing musical landscape. 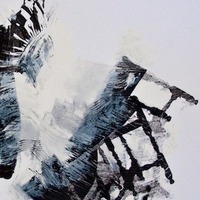