Featured Artists: Naked Aggression; Ryan Mudd and the Stuff; Genre: Punk; Rock;
British Invasion claims to be the largest punk rock festival in the U.S. Hosting some 3000 concert-attenders, the venue, Orange Pavilion was fairly full. There was an outdoor stage for American bands and an indoor one for the British bands. Opening the show on the American stage was Ryan Mudd and the Stuff. Thanks to traffic I wasn't able to see them, although i was looking forward to it quite a bit. I had seen them before and they put on a great show. Some other bands on the American stage were So Unloved, the Diffs, and Bang Sugar Bang. All three of which played pretty well. So Unloved is a female-fronted band with very strong vocals. The Diffs, often referred to as the 'Mini-Germs" are exactly as you'd assume; slurred, Darby Crash-like vocals and a pulsing, quick beat. Naked Aggression played around 6:30. They never fail to amaze me, ending the set with Back Alley Abortion, I didn't see a single person not singing along and having a blast. In between the American bands I saw, I was inside checking out the British bands. I don't even remember names of bands, but everyone before the Agitators were pretty bad, clad with fake accents and bad cover songs, repeated several times by different bands. I was more than happy for the Agitators to get on stage and start playing. Total Chaos was playing on the American stage outside, they'd be closing the American stage for the night.
If you were there, you won't forget it anytime soon. That's not because the headliners were amazing, or the venue was awesome. You know what happened during the Total Chaos set; Total chaos arose. Apparently a skinhead was stabbed, starting arguments and a chant of "(expletive) white power!" could be heard through out the venue. I immediately left the Agitators set and went outside to see what was going on. A group of about 1,500 people, mainly crust punks, surrounded the nazis and backed them into a corner. Kids were hanging from door frames and roofs, taunting them. This was all after the stabbed skinhead had been removed from the premises, and where corporate media began to get the story. wrong. Police attempted to break through the crowd to pull the surrounded skins out. The crowd remained tight around them and wouldn't let the police through, most of the kids didn't even know cops were trying to get in. Cops beat several people down to get through and eventually succeeded. A civil argument turned into a riot when police violence broke out. Throwing tear gas and pepper balls into the crowd and into the building, where no one knew what was going on, everyone panicked. Most of the crowd couldn't see and clung to each other to escape, tearing down fences to get out of the venue and to the parking lot, or even onto the street. I was with a group of people who tore down a chain-link fence surrounding the venue and we got to the parking lot. Once we could see, behind us, cops were beating down people running from the venue and shooting some with pellet-guns. Many kids began provoking the officers, some even caused damage to local business. Police forces from several surrounding cities, as far as Pomona, used brutality as a means of defense and revenge. By the end of the riot, several were hospitalized, concert-goers and officers alike. The city of San Bernadino, nor mainstream media have confirmed it, but at least four gunshots were heard by kids, my friends and myself included.
Bands played well, but it was hostile environment, particularly towards the end. Situations like this are what give punk-rock a bad name. There are ways to change this reputation. If you believe that punk-rock is about change and would like to make a difference, I recommend you check out the organization Greater Society, Greater America (www.myspace.com/GSGA). As well as promoting a positive opinion of punk-rock, they're organizing a fundraiser to help the family and local-owned businesses affected by the riots. 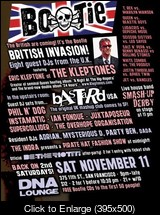