Do you have any upcoming shows?

Sure, always.
Sept 10th at the Hotel Cafe in Hollywood
Sept 22nd at the Back Booth in Orlando Florida and some upcoming things will include the Whisky in November and another show with Metal Skool at the Key Club in West Hollywood. Early next year we're planning on putting together our 4th tour of the UK.

We have a number of readers that live out of the US and I was wondering if you could tell us a little about the music scene in LA as if I have never been there.

The scene here is unusual. Not a great deal of bonding between artists. Everyone is very detached from eachother. For that reason, I started booking a couple of rooms on my spare time. Trying to develop a night where acts perform AND watch eachother and fans stay for the other performances. Don't get me wrong though, there are some famous rock venues around here that will always be an honor to play.

What inspires most of your lyrics?

What is a major influence to make you guys start this band?

Unlike most bands these days, we started just for fun. For the sake of making music.
No aspirations to be rich or famous, just to sing and play and be around friends. Of course, it evolved from there, but I'm quite proud that we did it just for the sake of expression.

Tons. The first night of our 3rd tour of the United Kingdom, we arrived late at the venue and by the time the show was over, all the hotels in the area were closed for the night.
We were gonna sleep in the van when this guy who caught the set offered for us to stay at his flat. George and Jake slept in a very small, crowded little girls room on a Barbie bed with their legs hanging off onto the floor. Chadwick slept on the filthy, cluttered living room floor with the light on as the host stayed up all night on the computer only feet away. I attempted sleep in a front room that was being used for storage. It was a mess. Garbage all over the place. It smelled. I found a couple of odd couch and chair cushions to lay on. At one point in the middle of the night I awoke to find a 4 inch SLUG on my face. I have 100 more stories, but that one comes to mind immediately.

What do you think about UFOs?

What religion are you guys and does it effect your music?

These are interesting questions. I'm pretty sure George and Walter are Catholic or were raised that way, as am I. Not sure about Chadwick. He may have been Lutheran or Methodist at one point. Now he's mostly into Zen stuff. There's a great deal of lyrics in my songs inspired by religion, faith and spirituality now that I think of it. Religion is totally boring and very interesting all at the same time.

Why do you think their are so many vegetarians in the music ind.?

I wouldn't know. The only veggies I get are the lettuce and onions on my In & Out Burger.

What do you guys do for work right now, other than playing music?

George only plays music. Aside from Blue Meridian and PSS (another original band that he CO-founded), he performs regularly in an 80's cover band. Walter seems to have a different odd job each week. Good for him though. He has a great deal of employable skills. If a boss becomes a jerk, he can just take off and find new work the next day. Chadwick is a bartender near Brentwood. I do graphic design a little on the side, but mostly I work in clubs, either as a disc jockey or concert promoter for other bands (as I mentioned earlier).

What is the title of your latest CD and could you tell us a little about it?

It's our 5th album. Well actually my first solo album. It's called "Avalon & Babylon & Me" and so far, it's my masterpiece!

It was 4 whopping years in the making. Nearly 40 musicians loaned their talents in the recording of it. All EIGHTEEN songs can be sampled both musically and lyrically on the audio page at www.donovanlyman.com . I hope you enjoy it.

I know its hard for a band to make it but it looks like you guys are doing pretty good for an LA band, do you have any promoting secrets that you would like to share with the rest of us?

It simply takes dedication. There are only so many hours in the day so you have to be willing to put a great deal of things off. Like successful relationships, a career that will provide retirement benefits, vacations (tours are our vacations) etc. Anyone who puts in less work that I do is probably just a musical hobbyist at heart. Which is fine, but you'd have to be David Geffens talented nephew to get anywhere with a minimal effort.

It's third only to SPIN and Rolling Stone. 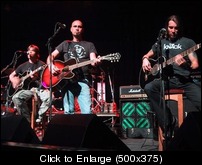