Well minus the graininess on the album it’s a relatively a good recording. The levels are off the only good sounding part was the guitar, vocals, and drums, kind of lost the bassist. But musically they were pretty decent. You can tell listening to the album that they haven’t performed some of the material a lot and defiantly in front of an audience. Through it all one thing stood out to me it was the guitarist! He was amazing! The chops were brutal, the breakdowns were mechanical and deadly, the riffs were gentle but complicated, and the fact that you can tell he was holding back for the rest of the band only makes me wonder what he is capable of. Overall the album was decent I would love to hear more from these guys and see what they can do but I believe most recently the band has disbanded. 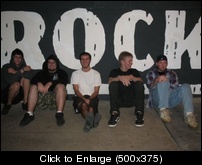