The day after I first listened to Big Star, and realized I loved these strange, hooky records, Alex Chilton, the vocalist/songwriter for Big Star, died suddenly at fifty-eight years old. It was strange to know that for all of his genius, he died without selling many copies of his albums, died with a small cult audience, died without health insurance. A brilliant man passed in the same quiet with which he had worked: the world didn't notice, but a small audience cried, and played “Thirteen” for the 300th time.
But that's how it goes in the underground music world: these men and women don't make money, but they are loved furiously, passionately, by the freaks who understand. Especially Alex Chilton, who created three of the greatest albums of all time in Big Star: #1 Record, Radio City, and Third/Sister Lovers. Big Star's hooky pop never made it big (record label troubles with Stax destroyed any chances they had), although it's tempting to wonder what would have happened if they did. As it is, the Posies, the Replacements, R.E.M., and numerous other bands displayed the influence of Big Star, and Alex Chilton lives on in the strange kids who found these albums and cherished them in their bedrooms.
#1 Record is easily one of the greatest power-pop records ever. It features numerous dark, beautiful little songs that take Lennon/McCartney riffs, and twist them with angular guitar and dry, relentless percussion. Chilton and his brief songwriting partner Chris Bell create these magical harmonies that spin and weave around the songs perfectly.
These are basically proto-indie songs, deeply personal, despairing, as Chilton expresses a mixture of venom and despair, looking for hope and comfort. Salvation is a constant motif in this record (“Well, I'll fall if I don't fight/and on my side is God”), whether in a woman or God or even in India. “The India Song” is one of the weirdest, most wonderful pieces of pop to crawl from the 1970s, by the way.
The album alternates between these confessional pop songs, and these frustrated teenage perspectives. One of the best songs on the album is “In The Street”: it's so simple, but so damn good. Two guys, hanging out in a small town, just another crappy night with “not a thing to do/but talk to you”. Listening to it for the first time, I knew exactly how they felt, that constant frustration and rage that defines teen ennui. And I haven't even mentioned “Thirteen”, covered by numerous artists, an indie classic, as a boy, over warm acoustic guitar and harmonies, yearns desperately for this girl, asks her to the dance, tries to comfort her, as the song bounces in chords of both pure innocence and desire. In two minutes and thirty seconds, it says everything in so little.
When Alex Chilton died, he left behind a discography of strange, underselling pop records that are a revelation. Big Star is going to be played by future generations not because of Chilton's death, but because some kids are always going to need to hear them. To hear the chords of “Watch The Sunrise”, close their eyes, and be told that despite all everything they've gone through, that it's going to be okay, that they can watch the sunrise, and that it'll be all right. 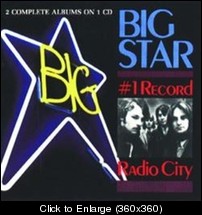