Featured Artists: Aftergloam; Aztlan Underground; E.C.E.K.; El-Haru Kuroi;
The Big Smile show, November 6th at Space 2710, was complete with a variety of musical styles and artwork. 2710 proved once again to be an intimate venue where performers were able to be up close and personal with their audience; standing room was limited as the crowd tightened up around each band. 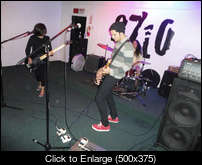 Aftergloam opened up the night at 10PM. This 3-piece experimental/garage/rock band from the San Fernando Valley commanded the venue's atmosphere with an epic set consisting of mellow to heavy instrumental and vocal progressions. Check out Big Smile's pre-set interview with Aftergloam.

Aztlan Underground commandeered the stage afterwards. This veteran east los angeles group played a signature set involving a fusion of various musical styles from metal to rap while describing, discussing, appreciating, and defending their cultural roots. Big Smile was lucky enough to get an interview with Aztlan Underground before they made their way to the Native American Music Awards a few days later. 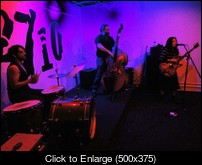 El-Haru Kuroi took stage third, playing a latin/jazz style set. EHK consists of guitar player/vocalist Eddika Organista, stand up bass player Michael Ibarrra, and drummer/percussionist Dominique Rodriguez. EHK's music is as entrancing as it is commanding: soft and inviting, on the surface level, while maintaing a back beat that relentlessly charges forward. The performance of this 3-piece band was a perfect complement to the rest of the night's music. Unfortunately, drummer Dominique couldn't make it to the show, however EHK's replacement drummer filled in perfectly.

ECEK took stage late into the night playing funk/style fast-paced instrumentals with various lyrical verses mixed in. ECEK has undergone a group change, finding a new drummer since their last performance at Space 2710. Unfortunately, the band's performance was interrupted due to a fight breaking out at the venue.

Overall, it was a great night with a variety of musical styles and performances!