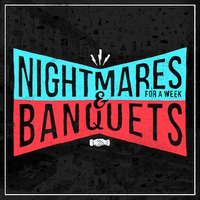 You can now check out "Matters" from Banquets and "Bleached Blonde" from Nightmares for a Week exclusively on PureVolume.

Additionally, "My Moped Year" from Banquets and "Dead Will Stay" from Nightmares for a Week are currently streaming on Noisey.

Originally concieved for release on another label the split proposed fell by the wayside with the passing time. Nevertheless, the two bands became fast friends and played a string of shows together in 2013. Both bands never gave up on the idea and after Banquets recorded several extra songs during their Self-Titled recording sessions, the split was back on again. Both Banquets and Nightmares for a Week released new LPs in 2013, so this split LP serves as an excellent refresher course as it features five new songs from each band.

You can catch both bands on tour soon, dates below.

Nightmares For A Week: