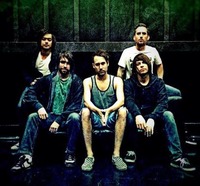 The difference between Facebook and MySpace is like night and day when it comes to bands and promoting their music. I looked to a friend who has been on the scene for the past decade. Playing guitar both in Eudora, which was around at the height of MySpace. While now on Facebook in Hideouts, Robby Friend tells me his thoughts between the two different worlds.

Robby describes MySpace as the "Holy Grail" for upcoming bands. Not only did the site allow bands to reach new fans for free, but it also made way for band-to-band connections in local music scenes. Facebook for bands is very hard to promote for free. There is little to no chance of new listeners to ever find your Facebook page and become a new fan. With changes to social networking marketing, bands have to find other sources on the Internet to rake people into their fan base.

Robby explained that Instagram is one of the best new ways to get your music out to millions of potential listeners. With the website/app that features only photos and videos, it's easier to create #tags, leave comments, and follow mass amounts of potential listeners than any other site with as many members.