Signed to Atlanta rapper T.I.’s record label, Grand Hustle records, and also coming out of Georgia, you would expect B.o.B AKA Bobby Ray to be your usual southern rapper with the usual southern hip-hop beats; but this has to be an exception. This album is a fusion of Rock and Hip-Hop at its finest and the fact that he has the vocal ability to actually sing without auto-tune makes this fusion even better.

With guest appearances ranging from the Hip-Hop to the Rock community, this album would be an easy listen for anyone that listens to both of those genres. Eminem, Lupe Fiasco, and Playboy Tre are just three of the guests from the Hip-Hop community; Hayley Williams (Paramore) and Rivers Cuomo (Weezer) are two of the guests from the Rock community. With hits like Nothin’ On You Ft. Bruno Mars (Track 2) and Airplanes Pt.’s I & II (Tracks 4 & 12) that are receiving massive radio play, this is a must have for those looking for an album that is something to relax to and dance to. One song that stands out to me and has strong Punk-Pop influence is The Kids Ft. Janelle Monae (Track 7), which had me guessing, did anyone from blink-182 produce this song. Also Magic Ft. Rivers Cuomo (Track 8) is very upbeat and gives the album a hint of dance-punk. 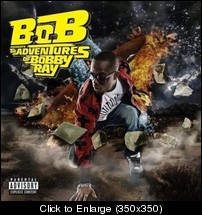