Animosity, As Blood Runs Black, The Faceless, Beneath The Massacre, At Battles End, The Final Burden, The Keep, The Hack Saw Circumcision At Chain Reaction 5/18/07 - 5/19/07

This review is for both nights at Chain Reaction. Animosity, As Blood Runs Black, The Faceless and Beneath The Massacre will have one review that will count for both nights.

First on the bill for the first night was At Battles End and they were pretty good id have to say. They are from down south in Mission Viejo, CA and they are a death metal band and some of their influences are Zao, Old UnderOath, Suicide Silence, Winds of Plague and The Acacia Strain. What they were playing was getting the crowd all pumped up for the rest of the night and of course people were moshing and hardcore dancing to their music but they did a great job of opening up the show check them out at there next show they are playing with Winds of Plague at chain reaction on 6/15/07 for more info and show dates go to www.myspace.com/atbattlesend

Up next was The Final Burden these guys were pretty cool I was in to their music but not at the same time. I like hardcore and all but I felt as if they were lacking something in their music. Its fast and heavy and all but I was not feeling it they put on a great show and all but if you want to check them out they are on tour with MORIA right now for more info and tour dates you can go to www.myspace.com/thefinalburden

The Keep opened up the place for the second night of Animosity and I have seen these guys play before and I’m always amazed how good these guys are and how awesome there music is, they have two shows coming up in Hollywood so get out to those and dance to there music because they are defiantly worth dancing to.There music is hard and powerful. For more info and show dates go to www.myspace.com/thekeepla

On second for the second night was The Hack Saw Circumcision. There music is what I call chug chug music and its pretty cool, the vocals are pretty deep and intense as well as the music. These guys were not half bad I think they sounded all right. They have another show coming up at Biacci’s in Ontario CA on 6/22/07so go check them out at the show or you can go to there myspace at www.myspace.com/thehacksawcircumcision and listen to some songs there.

These reviews beyond this point are for both nights.

Beneath The Massacre was not good at all I thought they had to much going on in their music, you can not hear any thing clearly and I was not in to there music at all, its to cluttered not well put together but if you guys want to check the out go to www.myspace.com/btm

The Faceless was cool I’m not really in to the whole death metal scene but some parts of there songs were cool break downs and blast beats but over all I didn’t care to much for this band as much as the last, they pretty much sounded the same to me and I didn’t really enjoy them but if you want to check them out you can go to www.myspace.com/thefaceless

As Blood Runs Black these guys were good, they are what Chris (Lead Singer) called MetalCore to be on the safe side, but they sounded very well put together and tight as a band and were very heavy and pretty awesome. They are going on another tour called The Summer Slaughter Tour with 8 other bands so that should be pretty awesome so if they come through your town check them out you will be quite amazed at this band so check them out on myspace for tour dates news and music www.myspace.com/asbloodrunsblack

Animosity was also pretty good as well, they are very tight as a band witch is why they sound so good live and they are only here in the U.S. for a few more dates then off to Europe they go for two months so all you people in Europe Check these guys out when they come your way but on the first night at chain at the end of there set they took a ton of feathers and a fan and blew that stuff all over chain out side people were covered in it, it look like it just snowed in side chain and it was just every where but it was a great show and all you hardcore / metal fans need to check them out! For info, news and tour dates go to www.myspace.com/animosity or www.animositysf.com 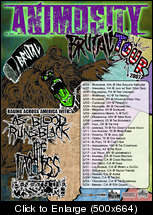