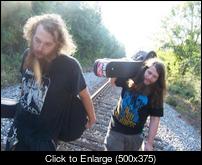 Big Smile Magazine: What's your name and describe your musical talents in Andy The Doorbum.

My name is Andy Fenstermaker. I write and record the material myself on either 4-track cassette recorders or outdated, hand-me-down digital consoles and then perform them either solo with an acoustic guitar or with a few friends backing me up.

Big Smile Magazine: How'd you manage to get the type of sound that is now ATD?

When I was younger I would record "albums" just for the fun of it on the 4-track. I probably did ten of them. Eventually I started working door at the Milestone Club in Charlotte, NC and letting people listen to them. I recorded an album in the door booth while giving out wristbands, and started selling it and hopping on shows, which lead me to where I am now.

Big Smile Magazine: What has been the biggest inspiration towards your musical career?

I find myself inspired by the harsh realities of the world around me. Drugs, death, history, religion. I know it sounds grim, but they can all be quite mesmerizing. Music just seems to be how my observations come out naturally... I'm not really sure if you could call what I do a career though, but it is flattering.

Big Smile Magazine: So I see you came out with a CD recently, can you tell us a little
about it?

The new CD Mt. Holly Sessions is the self-released follow up to the Door Booth album. It's been described to me as sounding like moon shine fueled backwoods appalachian refugee music. I'd say that's about accurate. Maybe through in a few hallucinogenic talks with god.

Big Smile Magazine: How can fan's get a hold of this CD?

You could send $8 to me (message me on myspace), or log on to myspace.com/andythedoorbum . I should have paypal set up very soon.

Big Smile Magazine: I watched a few of your video's such as "The Yeti". Did the director
pick the locations or were they just randomly picked?

The director was a friend of mine I was on tour with called The Emotron. We pretty much found the locations along the way while we were on a month long tour together. The Yeti is an exception though. It was filmed at the Mtn. Island Library opening, while two 11 year old kids did the Viennese Waltz. Why they asked me to do it, I will never know.

Big Smile Magazine: Have you had any interest in touring to the West Coast?

I had a tour planned for California but it got canceled due to lack of funds. I hope to be out there in the coming year though.

Big Smile Magazine: Is there anything new coming up that we can be looking foward to?

I will be releasing a two part album in the next few months. It should be two CDs of 35 songs total.