Ages and Ages are excited to share the second single off their forthcoming sop#re album Divisionary, premiering "I See More" today with TIME Magazine. Impressed by the band's "sunny songs built on complex harmonies, inspired choral arrangements, multi-part harmonies," TIME has declared the seven-piece Portland group a Band To Watch. Says frontman Tim Perry, the song is "about accepting the unwavering presence of darkness in life but choosing not to identify ourselves with it anymore," echoing the uplifting themes that shine throughout the album.

Fans can catch Ages and Ages on the road this spring with Mirah and Lake Street Dive, as well as at SXSW and Sasquatch Festival. The full list of tour dates is below.

Ages and Ages is more than a band. It's a collective of like-minded souls that believe in the power of music to change the world and elevate the spirit. Their music is bright and uplifting, with lyrics, penned by Tim Perry, that deliver serious introspective messages full of insight and consideration for others.

Their debut record, Alright You Restless, was made in eight days of feverish creativity, while Divisionary evolved over months of experimentation at Portland's Jackpot Studios with veteran producer Tony Lash (Elliott Smith, The Dandy Warhols, Eric Matthews), as well as the home studio of Ages bass player Rob Oberdorfer. During the process, the band suffered the loss of a number of close family members and dear friends, so the songs became a kind of road map for anyone attempting to avoid darkness, without becoming consumed by anger in the face of life's difficulties. "There were also great things happening," Perry adds. "One of us had a child, another got married. Life was tipping both ends of the scale; there were a lot of changes going on."

Perry spent ten days on a silent meditation retreat, formulating the direction of Divisonary, and his calm, centered vision is at the core of the music. The intricate harmonies, celebratory choral vocals, churchical piano and organ, inventive counter melodies, bright acoustic guitars, and exciting, interlocking rhythms set off aural fireworks to frame the grounded emotions conveyed in the lyrics.

The title track, "Divisonary (Do The Right Thing)," is a secular gospel song with inspirational harmonies, sanctified piano and smooth violin adding muscle to a simple refrain: "Do the right thing, do the right thing....don't you know you're not the only one suffering." A stomping, exuberant bass drum pushes the giddy pop vocals of "I See More," as it reassures listeners that, "It's all OK, I'll be on your side." The jaunty folk pop of "Big Idea" holds a flickering candle up to the darkness with intricate handclapping, gentle harmonies and the candid admission that, "All of my ins are on the outside. And I want you all to notice, cuz I have no will to hide."

On "Over It," acoustic guitars played in open tunings dance across a complex musical landscape to Eastern melodies and counter melodies, leading to the group declaring over a swaying 6/8, "I have no remorse for the way that I am anymore. No, I feel no shame." The band's funky hand clapping folk rock rhythms move "The Weight Below" as Perry and the band belt out a soaring chorus to release the feelings that cause stress and suffering. "And the weight that we left behind, we're all better off without it, and it ain't even worth our time, so I ain't gonna worry about it." The complex structure of "Light Goes Out," bounces along on a stomping bass line, bright, piano shenanigans and the band's joyously dislocated vocals: "I kept up with the verses in my head, running right along beside 'em all day. At some point, well I found myself wondering if I was even running or just running away."

The harmonies and intricate instrumental interplay on Divisionary are carefully crafted, but never sound forced, with complex arrangements that are naturalistic, invigorating and free. The clash between the band's stirring folk sounds and emotionally thorny subject matter makes for a bracing listen, "as if the internal conflict is happening in real time," Perry says.

"Ultimately I think the band all feels hopeful and blessed," Perry concludes. "These songs reflect that optimism, but they don't do so lightly or try to dodge the struggles we're dealing with individually and as a band. It was an exceptionally long, hard road this time around but in the end, we're all really proud and excited to share this record." 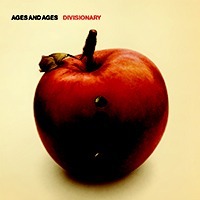