Against Me! - White Crosses (punk)


Against Me!, with their second major-label album, have turned their back on much of their past: their DIY ethics, genuine anarchist stance, and contempt for modern rock music has changed. Now, the name of the game is cooperation with major labels, liberal beliefs or no politics at all, and genuine rock ballads and big, meaty choruses. Brilliant frontman Tom Gabel, teaming with Butch Vig, is aiming for the big time, as poor Paul Westerberg tried to do twenty years ago.
And you know what? It sucks, it really does. Yes, Gabel can write great pop hooks, but he doesn't need to write them for a major audience. Against Me! hasn't learnt the lesson the Replacements learned, that the people who are actually going to appreciate your work are your devoted fans, not the people in the stadium. In a lot of ways, this album is their Don't Tell A Soul: several good, even great songs, but weighed down by overproduction and modern rock mixing.
The album starts off with “White Crosses”: it's not too different from New Wave, but like much of the album, it feels ripped from Gabel's diaries. Starting with a drum sound that surprisingly rips off “Know Your Enemy” by Green Day, but with a bouncy, Celtic guitar melody, Gabel stalks the streets of St. Augustine, Florida, seething with hate as he sees “White crosses on the church lawn/I want to smash them all.” Still, it's a bracing track that segues into “I Was A Teenage Anarchist”: “I was a teenage anarchist/but the politics were too convenient/Do you remember when you were young and you wanted to set the world on fire?” It's poignant, one of the few punk songs that is, but the point of the song is clear: Gabel is turning his back on his former politics and joining the mainstream as a rock star.
Much of New Wave and Searching For A Former Clarity were literally Gabel's struggles with signing to a major label and joining the mainstream transcribed as music. This album deals with Gabel's life now, with a new wife and kid, and his own past: his breakups (“We're Breaking Up), his past as an anarchist (“I Was A Teenage Anarchist), and his settling down with a family (“Spanish Moss”). The best songs on the album have less of the cliched choruses and massive production and are more traditional: fast, angry, and genuinely emotional.
The worst songs on the album are the ones that sound the most like what we hear on modern rock radio. “Because of the Shame” is the biggest culprit, with a soppy piano line from surprisingly Franz Nicolay, a boring “whoooah” hook, but with haunting, poignant lyrics about dealing with the death of an ex: “I watched your mother bury you today with tears in her eyes/It wasn't her words that shook me but the resemblance you shared..Even “Suffocation maybe the most boringly traditional song Gabel has written, is like every lyric on the album: excellent. Gabel is a gifted writer, and his strange over-wording in writing is more endearing than off-putting. It's the music that's the problem, too willing to compromise and tragically cliched to the point of frustration.
The good songs on the album, however, are excellent. “High Pressure Low features a bridge that contemplates Robert McNamara's legacy and despairs that “there's just no future left for us to dream of/Living in an era of instability”. “We're Breaking Up is an over the top rock ballad, but Gabel's voice sells it enough that it becomes overemotional in a way that's grand, like Journey and Boston (that I have to compare Against Me! to Journey kind of suggests how the album has dipped in quality compared to their others). “Ache With Me” is heartbreaking. The acoustics and piano played in a way that suggests a bleak winter day: “I've spent every dollar that I've ever earned/I'll bleed my heart out, I'll give every word.../I've got no judgment for you, come on and ache with me.”
And then the best song on the album: “Rapid Decompression a punk rock song over in less than two minutes. And it is a punk rock song: fast, raging, commanding, brilliant, it makes you want to smash cop cars and pogo through the small town you hate. Unfortunately, the last song, “Bamboo Bones” is a boringly overproduced come-down, and it really shows the whole problem of White Crosses: there's a lot of potential for a great album, but little follow-through, with great lyrics, but boring music and frustratingly clean-sounding guitars. What's happening to Against Me as they dive into the mainstream could be illustrated by one of Against Me's best songs while at their peak: “Don't Lose Touch.” 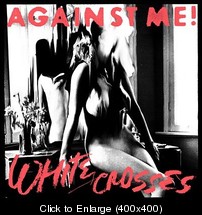