Hello Adam Rebelius, How are you doing today?

I woke up a little late today, so I didn't get some errands run. I'm a little miffed about that, but otherwise I'm in good spirits, and I hope the staff and readers of Big Smile are too. Thanx for asking.

I read on your Punk Rockers profile that as of right now you are your band, but your also looking for people to play with, how is that coming along and what are the positive and negative aspects about playing alone?

Yes I AM Chicago's Own One Man Punk Rock Maniac! I'm always looking for potential recruits, but, so far, nobody has what it takes. Being in my band is a career move, and it seems like nobody wants to make a career out of being a full time musician. The positive aspects of being a solo artist is you don't have to deal with anybody's head games, or star/ego trips. If there is any downside to it, it would have to be that basically my music is really written more for a band to perform instead of a solo act, but I'll keep forging ahead.


I am literally listening to your music right now and I love it. You seem to have a lot less limitations with your music than a lot of other bands and I like that a lot. How did you get into making your own music?

Well, thank you for the kind words. I'm glad you like what you heard. I got into making music on my own because I got sick and tired of looking around for musicians who wanted to play punk rock, or take it seriously as a career move. I wasn't getting any younger sitting on my bottom waiting for the phone to ring, and I was getting disappointed that the people I was meeting either didn't want to play punk rock, or their idea of what punk rock is or should be were quite different from mine. Punk is supposed to be about D.I.Y. so since I had nobody else but myself, I just went ahead and did it myself, consequences be damned.


Adam, your a old school punker, from what it looks like you have been into punk for a while. Do you have any stories that stand out more than the rest about a punk show, concert or just hangen out with the guys?

I think one memorial punk rock moment that I'll always remember was when I went down to Atlanta, Georgia to celebrate my 30th birthday at The Somber Reptile w/The U.K. Subs! I've known various members for over 20 years, and was able to get on the guest list, and drink with the band all night. (I wish Charlie Harper would come back to the states soon)


What are some of your favorite bands?

Favorite bands? Well bands and musicians I feel are crystalized embodiment of punk would have to be, in no particular order, Robert Johnson, The Fugs, The Shaggs, and Screaming Lord Sutch. But if you want a list of punk bands that wear the punk label like a jacket it would have to be, Conflict, STICKsparrer, any band on the Crass label, D.O.A. Discharge, Exploited, G.B.H. U.K. Subs. Also, although not considered punk, would be Bon Scott era AC/DC Fast Eddie era Motorhead, but let's face it, Motorhead has never put out a bad album as far as I'm concerned, and the first two Venom albums. I also like a lot of Oi! music as long as it's not right wing or racist, although I've heard so much Oi! in the past 30+ years I'm getting a little bored with it, because it's getting rather repititious, but I still love it. I'm pretty open minded musically, and will give anything a listen at least once. Speaking of Oi, there's a band in Chicago called Bleach Battalion that is fronted by a jewish, mulatto lesbian. They're a little rough around the edges music wise, but I'm sure with some practice, they could go far. (Also like "Crust" and "D-Beat" style punk as well) Before I go on to the next question, another band one might want to look up are The Hired Goons. Imagine if The Ramones came from Springfield, and every song was about the Simpsons. If you like the Ramones, and the Simpsons, you'll love Hired Goons.


Punk seems to be always on the line of questioning, not a lot of people understand it and even less amount of people actually get it. What is punk to you?

Well to me, punk was and is about bashing out three chords, and singing what's on your mind and having it be honest and come straight from the heart. It's as much of an attitude as it is a style or genre of music.


In your opinion, what is the best show you've ever seen live?

Best Show? Well another show that immediately comes to mind other than my 30th birthday was six years ago when D.O.A. played at the old Bottom Lounge/Lakeview Links. Joe Keighley's autobiography, "I, Shithead" just came out, and He was doing a spoken word tour w/D.O.A. to promote the book. I went to Quimby's # Books where he was doing the reading, and asked him if he wanted to split cab fare to get to the venue. He told me that if I paid for the taxi, he'd put me on the guest list. Joey is one of the nicest people I've met. A gentle Giant. This was in October of 2004. I can't remember the exact date though.


What do you think of the bands Mr. California or Justin Sane?

I must say, I've never heard of Mr. California, or Justin Sane, but with a name like that, they sound like they'd be worth checking out. (Justin Sane, has such a Bowie-esque quality to it)


Have you been in any bands before?

Six years ago I was in a comedy rock band called "Genral Patton and His Privates" We played AC/DC style rock, with some pretty goofy lyrics. Although I'm not on speaking terms with him anymore, I'd encourage people to look them up. They can be quite funny.


What are some of your websites?

I am still currently at myspace, and I check it once a day for messages and announcements, but I'm more likely to be found at punk rockers dot com. I'm trying to get all the punx, skinz, and bands that I know to sign up for punk rockers dot com, since I'm not happy with the new changes at myspace, and it seems like I'm not the only one either. I don't like the look, the slow page uploading time, or the fact my friends list is now random, instead of alphabetical order. I didn't ask for these changes, nor were the users of myspace consulted about it!

Last words? Believe in yourself, or else nobody else will. The biggest mistake a person can make is being afraid to make them. You are the end result of 4 billion years of natural selection and evolutionary process, so start acting like it! Don't take life for granted because you weren't guaranteed a long life, you were only guaranteed that you would die someday, but on the other hand, don't take life TOO seriously, because, as we all know. nobody gets out alive. Also, when you do what you love straight from the heart, you're showing the world that you're out of your mind. Thank you Big Smile for taking the time to interview me, listen to my music and offer your thoughts and opinions, and thank YOU dear reader, for taking the time to read this interview, and hopefully go to my profile pages at my space or punk rockers to check out my music for yourselves. 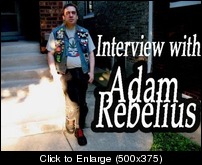