A Decade of Loving Boris Yeltsin

10 years ago in Springfield Missouri, Someone Still Loves You Boris Yeltsin began writing, playing, and recording songs in member, Will Knauer’s house. Much of this early work would make up their first full-length album, Broom. A decade and two albums later Someone Still Boris Yeltsin have collected 26 B-sides from their past and delivered us Tape Club, a title fitting to the choice and style of songs on the album.

Though a compilation of demos and early recordings, Tape Club is a meticulously planned album where the songs progress through their stages as a band. The album begins with lo-fi songs, seeming as if the band recorded them directly in a tape recorder. Fans of their first album, Broom will enjoy the demo version of What Will We Do and Lower the Gas Prices at the Howard Johnson.

Tape Club progresses to alternate versions of songs from Pershing and Let is Sway and to previously unreleased tracks. Tape Club could easily be passed off as yet another filler until the next album as so many bands produce, but instead Tape Club is a gem for both loyal fans of SSLYBY to savor and for new fans to discover. For fans who are just getting to know the band, this album is a great place to start; it embodies the band and their career.

Dead Right, a track from the bands second album, Pershing is stripped down to acoustic guitars, hand clapping, and harmonizing vocals that deserve to be played at any backyard- summer barbecue. Back in the Saddle, a song I could skip over on Let is Sway, is refreshed in its demo version, proving that sometimes less is more. In this version it is easy to mistake it for a track off the simpler first album, Broom.

One thing is clear from Tape Club, that SSLYBY put energy and thought into everything that they produce, from songs that would never normally appear on an album, to some of their more recognizable hits. It is refreshing to hear a band that has stayed loyal to its roots through the years and that is clear from the progression of the songs on Tape Club. While the differences are there, every single song is clearly SSLYBY. Here is to 10 more years of loving Boris Yeltsin…. 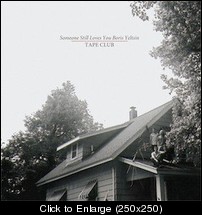