46 Short played a very energetic set. They are a punk rock band from Long Beach, and have been around for some time; ten years now. They play a very fast ‘80s style of punk, and put on a good show. Unfortunately, the show, doesn’t draw a huge amount of people. I am not the biggest fan of the venue, but the venue doesn’t effect the bands performance, so I will not go into that. They played a good show, and with punk rock bands, the crowd matters quite a bit. You can have an awesome band play, but if there isn’t a large crowd it just isn’t the same as if there was. There was a small to medium sized crowd of people that definitely knew the band and a few people that knew the lyrics to the songs and were having a great time, however it definitely would have been a much better show with more people. The band did an excellent job, and I definitely do recommend checking them out. If they happen to be playing where you are at, go. I believe they have a new album coming out in the upcoming months.
Another band that played was Naked Aggression. They are one of my favorite bands. I have seen them many times since their reincarnation a couple of years ago, and each time the show is incredibly fun. They are a politically and socially motivated punk rock band out of Los Angeles, and have been around since 1990. This was their CD release show. They just put out a new compilation album with a ton of stuff off their previous records and a few new songs to make it interesting. They always play an awesome set, this time, though, it seemed to be bugged. The bass amp decided to not work, and even got knocked over, the guitar broke, but luckily it was just the cord, and stuff like that. During one of the pauses, Kirsten decided to talk about their experience with the Warped Tour this year. Apparently, all had not gone well for them and it had served as an eye opening experience against it. It was interesting to hear, and wasn’t the usual rambling on of crappy jokes most bands will do when something breaks. The crowd was defiantly into them, quite a few people came just for them. It was nice to see a bunch of people up in the front having a good time. It was about the same size as 46 Short, but with new faces everywhere. Despite the setbacks, it was still a lot of fun, and Naked Aggression puts on an awesome show. Definitely check out Naked Aggression at www.nakedaggression.com or you can even find them on myspace now. 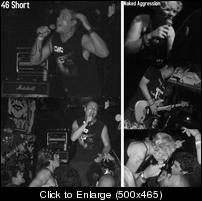